Back in the studio, time to begin a new painting, and as usual my inclination was towards flowers. I was influenced by the subject this week at AVA which is 'Spring' and thought I would look for something of that nature to start.
Over the past few weeks I seem to have done several paintings of subjects outside my comfort zone and we have all been agreed that it is good to push oneself from time to time, so I thought I would continue to try something a bit different. This time however, I stayed in the floral zone but decided to try to paint a more complex flower. I so often tackle single large blooms so its time for a change. 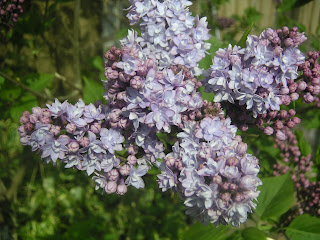 I came across a couple of lilac photos from my garden last season in my resources folder and thought they would do as a starting point.

The challenge here was to paint these blossoms without tightening up too much in an attempt to paint all those little buds and flowers.

I started in the usual way of covering the paper with a wash of various mauves, purples and pinks and added some greens at the top. When this was dry, I briefly and lightly drew in the approximate positions of the flower heads, and with some trepidation set about trying to represent the lilac as attractively but as loosely as possible.

In order to achieve this, I used lots of water and plenty of gouache to create the tiny flowers, paying as much attention to what I left out, as what I put in. I did not find it easy and could have given up on a number of occasions during the process. What I did find helped was only painting in short burst. Immediately I felt the painting getting too detailed, I gave it a rest and came back with lots of water and paint a little while later. 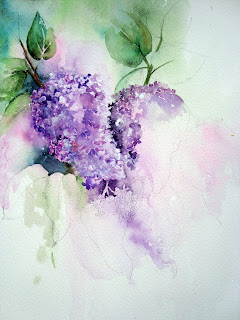 In this photo you can just about see where the initial washes were placed. As I painted, I included some of the foliage to help see how the composition was developing. 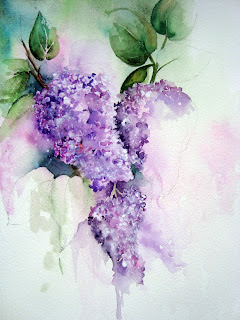 I tried very hard to only add recognisable flower shapes sparingly to help maintain the looseness. This I did by using white gouache in places mixed into the wet underpainting or on drier areas for more detail. I thought it might be useful to see this in a little more detail. 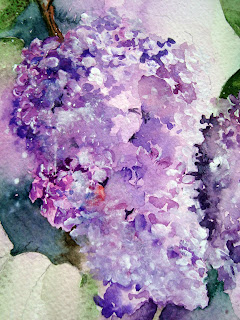 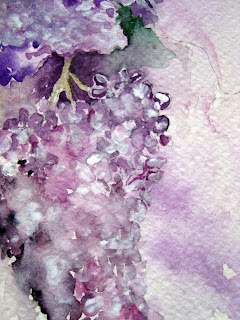 The whole process did require quite a bit of patience as it seemed to take ages, but when the flowers were finally finished and the background and greenery were added, I was pleased to have stuck with it and seen it through to the end. It has also given me another process to try to refine and develop which stops us getting bored with the same old thing! 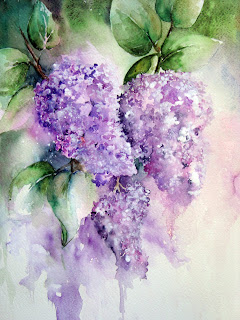 Now that it is on screen, maybe the leaves should be a bit darker and glossier, but that can easily be remedied after living with it for a while!
Posted by Yvonne Harry at 18:05

Yvonne Harry
I started my professional life as a Home Economics teacher in a Nottinghamshire comprehensive school. The family moved to Bristol where I worked again in the Home Economics and Needlework Department in a city school. The changes to the national curriculum pushed me towards more creative Textile work and I finally found myself teaching Art up to A Level standard. I am a self taught artist,whose developing love of my garden and the flowers I grew, led me to spend much time painting florals, This has remained my first love, although I do occasinally produce landscapes and other still life work. Most of my work is in watercolours or acrylics, I paint regularly with Avon Vally Artists, a group of painters based in Saltford between Bristol and Bath. I am part of a team of three which organises the group. I have been fortunate to hold successful exhibitions in Bath and in the Cotswolds and I am also fortunate to have an annual exhibition in Wells Cathedral. I have a daughter, Elaine, and still live in South Bristol